The original Rangiatea Methodist Māori Girls’ Hostel opened in 1940 and was situated at the Mission House site in St.Aubyn Street and catered for up to 12 girls. The new Hostel in South Road adjacent to the College was opened by the Prime Minister Rt. Hon Walter Nash on 14th March 1959.

The College enjoyed a happy association with Rangiatea over the years and worked in close co-operation with Sister Marriott and Sister Wedding.

We are indebted to Sister Marriott for the following as it appeared in the first College magazine:

“The name Rangiatea was acceptable to all the tribes because it was the sacred marae or meeting place known today as Hawaiki where all the canoes called on the great migration to New Zealand. It was also the name of one of the schools of learning where young chiefs were sent to learn the lore and legends of their tribes.

The interpretation of the word Rangiatea as used by the hostel is “the true light of knowledge from heaven.”

So it is hoped that the boarders of all races trained and equipped in the hostel will become women of strength in their communities. Surely the mottos of both Hostel and College complement each other – ‘Nga kakano o Rangiatea”- the seeds of high endeavour and courage will be carried by the students out into their communities.”

Fourteen third form girls, generally winners of Maori scholarships came to Spotswood College in 1960. It did not take too long for them to become absorbed into the school though one or two found life in the city quite different from that of the very small communities from which they came. Our first Head Girl Alison Bruning came from the hostel. Others became prefects, team captains and leaders of various activities and gave every evidence of becoming “women of strength in the community.”

Over the years they gave the College an insight into Māori culture through their presentations at concerts and on special occasions which the rest of the College might never otherwise have experienced.

At its peak, the Hostel housed up to 70 young women the Hostel that they had girls attending New Plymouth Girls’ High School and Spotswood College and in addition, places were held for working girls. Rangiatea was inter-racial and inter-denominational and it was good that many came from well beyond Taranaki (the Solomon and Ellice Islands, Rarotonga, Niue, and Fiji, as well as a few European students) for they brought the influence of their backgrounds with them.

It was a sad day for the College when the Hostel was closed in 1977. We enjoyed seeing their energy, cheerfulness and keen participation in all our activities. 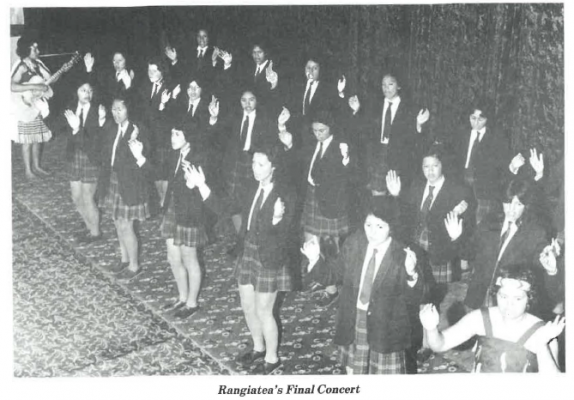